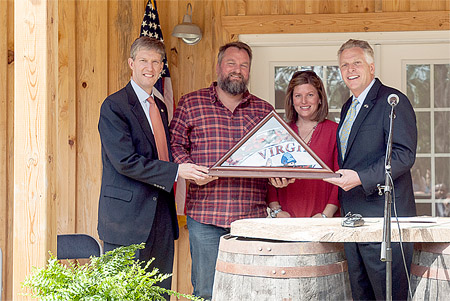 Gov. Terry McAuliffe and Todd Haymore, secretary of Agriculture and Forestry, paid a visit to Halifax County on Wednesday afternoon to announce the opening of two job-creating projects tied to the area’s agricultural riches.

Springfield Distillery, a bed and breakfast serving bourbons, whiskey, and gins, received a $10,000 grant from the governor’s Agriculture and Forestry Industries Development (AFID) fund to assist with the creation of five jobs. McAuliffe also presented a $12,000 grant to Slick Rock Lumber Company, a new venture by Kenny Hodges that will create another 13 jobs in the Nathalie area.

“Our economy is cranking, but for me it’s got to be cranking in all parts of the Commonwealth,” said McAuliffe at an event held under bright skies at Springfield Plantation and Distillery, located on River Road. “That’s why I’m in Halifax today, to show the state’s support for it. And right now I’m standing in the greatest county in the greatest state in the greatest nation on Earth.”

Accompanied by the owners of both companies, McAuliffe hailed Virginia’s efforts to promote agribusiness and timber industries, with an assist by Halifax County, which will put up matching funds for the state grant awards.

The new craft spirits maker, the first of its kind in the Halifax area, will create five jobs and draw 100 percent of its corn and barley stock from Virginia agricultural producers.

Owned and operated by James and Kelly Gordon, the distillery sits on 46 acres of the 1842 Springfield Plantation, complete with a tasting room, production facility, several log cabins for lodging, and will offer production classes and farm-to-table dinners.

“This is a huge asset,” said Halifax County’s Director of Tourism Linda Shepperd while checking out the detail of the antique cabin that will soon be the tasting room. “It’s just another jewel in the jewelry box to get more people to come to Halifax County. People like to visit places they don’t live, so this is really a good spot for people from cities to come visit.”

Last year, the couple and distillery grounds were featured on DIY Network’s Barnyard Builders, where the building crew put together the tasting room cabin. Having moved from Northern Virginia a few years ago, the Gordons have fallen for Southside’s charm and are very eager to officially open their distillery to the area.

“I try to make a point to people of how proud I am to be a part of Halifax County and how, given every choice in the world, I chose Virginia, and I chose this county,” James Gordon said. “All the businesses in the area are helping us move along and do what we can with the distillery. We hope to be up and running by the Fourth of July weekend.”

In addition to the abundance of wooded land, Springfield Distillery is located on River Road in an area not too far from the water.

“The Dan River is so close to us here, and we’ve done a lot with the Blueway,” Shepperd added. “And we’re trying to figure if we can get a boat running, like the old ferry. I can see somebody wanting to stay here on a weekend and canoe or kayak down the river, go into town for a bite to eat, then get a ride back to Springfield.”

McAuliffe announced that the distillery will invest $160,000 in the site improvements and equipment needed to open a new distillery, tasting room, and remote-licensed ABC store and will commit to purchase almost 150,000 pounds of Virginia corn and barley over the next three years — 100 percent of the agricultural products needed for the new production venture.

“This is such an important industry for us,” McAuliffe said. “When you have these types of facilities, it brings the tourism in. We had 40 million visitors in the Commonwealth of Virginia last year. Billions and billions of dollars of economic activity comes into our tourism, so it’s not only going to be what is sold here, but that the folks are going to come down to Halifax County.”

Partnered with the county and the distillery through the Agriculture and Forestry Industries Development Fund, McAuliffe approved a $10,000 grant from the AFID Fund to assist with the project, which Halifax County is matching with local funds.

“Entrepreneurial projects like these should be recognized and commended for strengthening these important sectors of the Commonwealth’s economy and for enhancing Virginia’s reputation as a world-class spirits, wine, cider, and craft beer producer,” McAuliffe said.

Book one of our cabins for your next vacation right next to the distillery! Click the button below to check rates and availability.